I WISH MERCY ON THE SOUL OF ALİ QAZİ FROM XWEDA 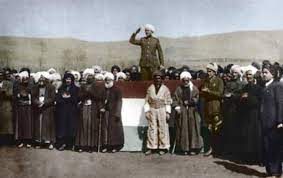 President of Mahabad, the Kurdish Republic during 1946 and 1947 Mr. Qazi

Muhammad’s only son, my close friend Ali Qazi, has passed away this morning. I wish mercy on his soul by our Creator, and hope that he will find peace in his final resting place, paradise.

I would like to express my condolences especially to his wife and children, and I want them to know that we share their pain.

I have personally met Ali Qazi in the 1970s. He has never left my side throughout all the struggles that I endured. He frequently told me; that when he didn’t see me, he felt a void.

His friendship did not have any boundaries. He lived in Kurdistan and despite the distance and his work and power; he would still come to The Netherlands just for a visit.

When one evaluated this friendship within a humanitarian framework of the Kurdish society, he is one of the rare personalities.

He came to visit me in prison a few years ago. He said humorously; Keke Hussein we don’t even have a picture together, this is a matter of life and death, let’s take a picture together.” We took a photo with him with special permission.

He had been seriously ill for the last six or seven months. My children always went to visit him. Especially my second oldest son shared a special bond with him; they felt close as two brothers. He used to joke with me about my middle son.

He told me that my son was enjoying when he told him that he was a true Kurd.

I wanted to briefly describe my dear memories with Mr. Ali Qazi.

He has put us in deep sorrow by receiving the mercy of Xweda.

Note: Ali Qazi was a founding member of the United States of Kurdistan.

On behalf of the United States Government of Kurdistan

THE DUTCH GOVERNMENT IS HOLDING OUR LEADER, MR. BAYBASIN, HOSTAGE AND WE CONDEMN THAT RESTRICTIONS HAVE BEEN IMPOSED ON HIM AND WE REQUEST THAT THIS UNLAWFUL SITUATION WILL BE ENDED IMMEDIATELY